The Performance Project began in September of 2000 as a theater and movement workshop at the Hampshire Jail and House of Corrections in Northampton, MA. Eight men incarcerated at the Jail collaborated with dancer/choreographer, Amie Dowling, and visual and theater artist, Julie Lichtenberg, to create a performance piece, “Works in Progress.” This piece was based on the group’s experiences, ideas, beliefs and themes that they wished to communicate.

From 2000 to 2004, under the evolving organization, “The Performance Project,” groups in the Hampshire Jail workshops collaborated to create four original plays. During performances, the jail’s Visiting Room was transformed into a blackbox theater, incorporating professional lighting and sound, and sometimes live music. Each play was performed three or four times, for invited audiences of up to eighty community members.

Between 2000 and 2006, the Performance Project produced original plays at the Hampshire Jail, led theater workshops for women at the Hampden Jail in Ludlow and for incarcerated youth. In 2004, the Performance Project moved outside the jail and established an “outside” performance company, comprised of members coming out of incarceration collaborating with other artists in the community.

“...the things that divide people dissolved, and the things that are essential to our humanity rose. We shared hearty laughter. We felt the pain of being misunderstood or alienated from loved ones. We touched the commonality of despair and hope.” - Larry Parnass, Daily Hampshire Gazette

“In the performance I saw, the level of empathy with the audience was extraordinary, immediate, in a call and response, shock of recognition sort of way”. - Robert Tobey, Valley Advocate

In a culture where politics, social structures, and the media suppress expressions of truth about racism, economic oppression, and incarceration in our country, The Performance Project inside and outside the jail has been a venue for self-representation. Our creative work is informed and shaped by the experiences and beliefs of ensemble members, who claim full authorship of the plays they produce.

Through the performances, audiences have had the opportunity listen to the experiences and ideas of people whose stories are rarely told, and to expand their perspectives and expectations of people coming out of jail. The plays address critical social and cultural issues, and initiates a dialogue between people who have been incarcerated and their communities. 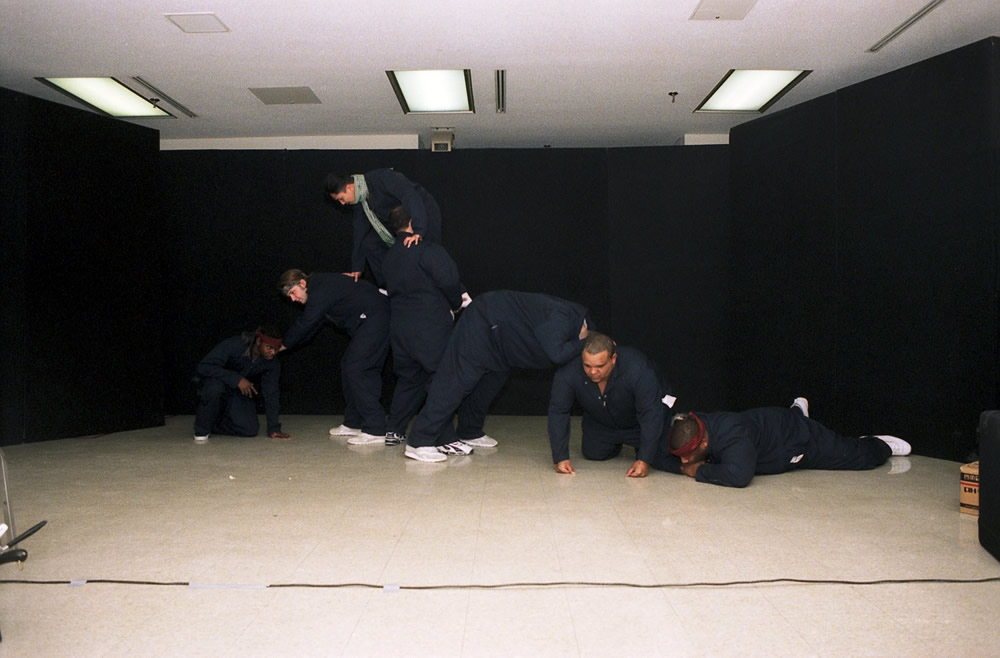 Works in Progress (2000) was a performance of monologues, movement pieces, and scenes linked together by “Recipes”. “Mix together 2 cups of love, 1 quart hard worker, and 1 tablespoon of dishonesty. Add 1 teaspoon of feelings, 3 tablespoons of tough guy, and a pinch of smart-ass. Slowly stir in my tears. Set aside. Dice all of the wrong I have done. Serve it with a fistful of suck-it-up...Let chill.”

“Together they guarded the truths of their narratives, unbound them from biography and made them speak, as art must, of bigger things.” - Larry Parnass, Daily Hampshire Gazette 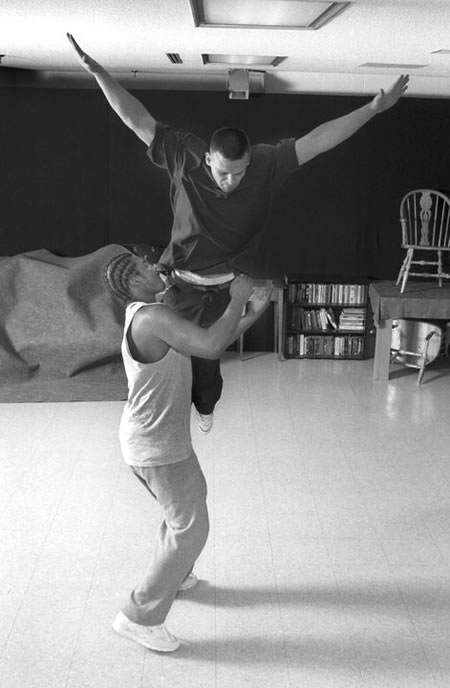 59 PLACES (2001) was inspired by a group member who lived in 59 foster homes between the ages of nine and eighteen. His story was interwoven with the story of three brothers and a cousin who live together. Exploring the concept of “home” the play portrayed one man’s search for home, and the rich complexity of intimacies and tensions of a family within their home. 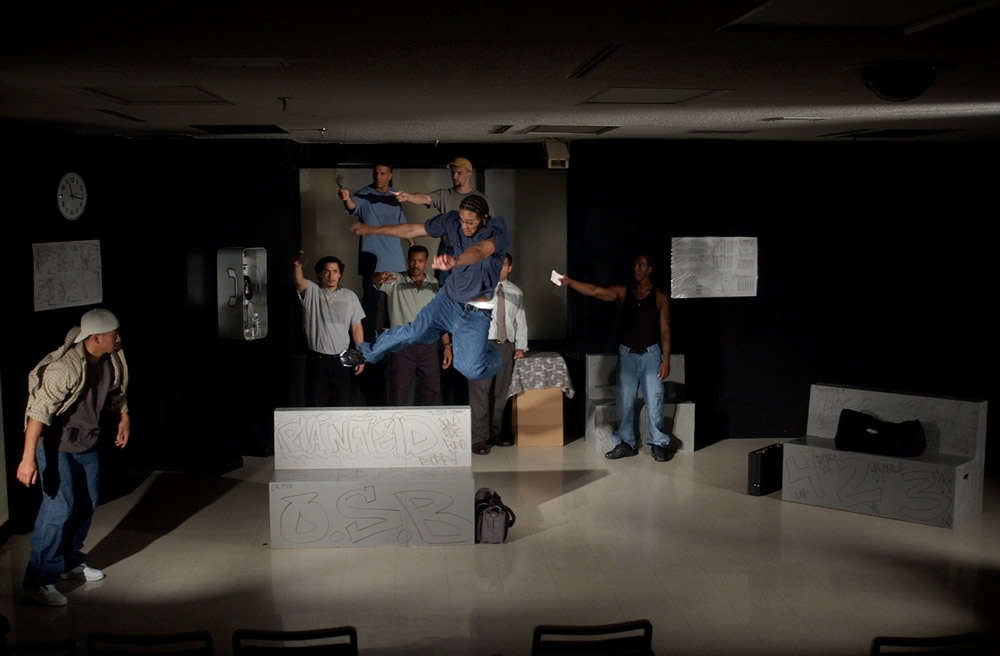 not so very far from here (2002) was set in the Peter Pan bus station of Springfield, Massachusetts. The play focused on the people who hang out there and the contradictions between their personal realities and their public personas. The play is a fusion of small talk, conflicts, phone conversations, hustles, acts of courage, sounds of buses coming and going, dreams, memories and conflicting truths. 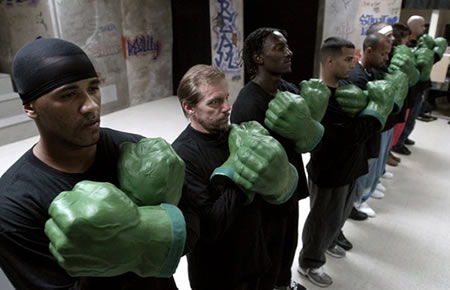 Counting the Minutes (2004) was based on the struggle with addiction, incarceration, and the obstacles confronting people upon leaving jail. The play explored personal and societal forces in the characters’ lives and in their fantasy lives, drawing connections between capitalism, materialism, addiction, and incarceration. 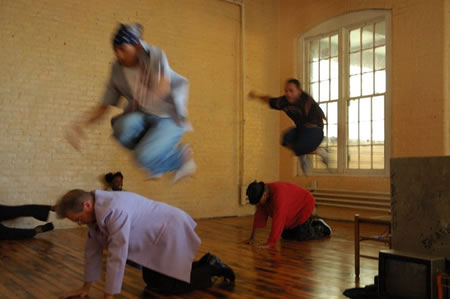 In 2003, inspired by the strong interest of members inside the jail to continue their involvement on the outside, Julie Lichtenberg started an “outside” company. The “outside” company included men and women who have been incarcerated and other artists in the community 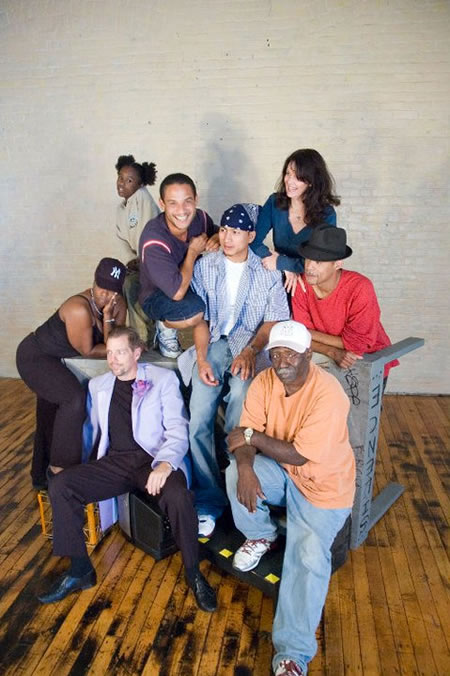 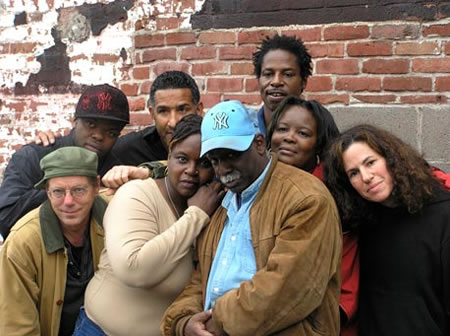 a warning for the king created (2006) is a contemporary myth based on company members belief that when an individual, or a people, is denied his or her voice, chaos will ensue. The title quotes the proverb, “the silence of the people is a warning for the king.” Through spoken word, rap, monologue and movement, the play addresses themes of greed, racism, silencing, addiction, and finally, the urgency and redemption of speaking out, and recognizing that our fates are intertwined. a warning for the king was performed at American International College in Springfield, Thornes APE, in Northampton, and Holyoke Community College, in Holyoke, MA. 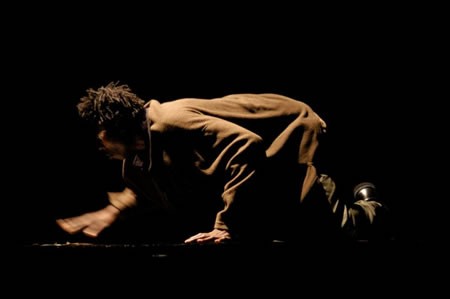 “The actors tell the tales of the insanities of bureaucracy, the foolish logic at the heart of discrimination, the white-knuckle absurdities of addiction,” - Robert Toby, Valley Advocate 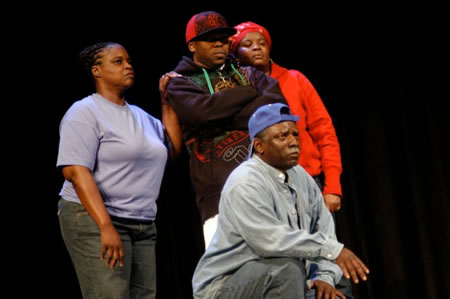 “Political art can be redeemed by passion and imagination, but the most immediately persuasive ingredient is the sense of hard evidence the testimony of witness.” - Robert Toby, Valley Advocate

Few social and institutional networks exist to successfully support people who transitioning from jails and prisons to lives that will sustain them economically, socially and spiritually. Supporting outside company members in their re-entry, and often, in their recovery from addiction, was one of the challenges the Performance Project “outside” company faced. For two years, the group held a weekly peer-led support group, facilitated by Joaquin Rodriguez, a counselor in the recovery field.

In 2007, Julie Lichtenberg responded to something she had been listening to many Performance Project members say for a long time, both in the jail and on the outside. They said that if they had been able to participate in a community like the “Performance Project” when they were growing up, it would have made a big difference in their lives. Based on these conversations, and through additional conversations with Frances Hubbard, Edison Santana, Carla Wojczuk and James Arana, Julie Lichtenberg founded First Generation, which began in 2008.

The Performance Project has always faced many challenges as a small non-profit organization sustained primarily by volunteers. Many community members stepped up to support outside company members with legal help, counseling, employment, transportation, etc. We have lso received community support in the form of rehearsal space, workshops, choreography, guest- directing, as well as set construction, lights, and sound design. Volunteers and college interns have helped to sustain the organization itself with administrative support, grant writing, fundraising, graphic and web design, etc…

We honor and thank all who have so generously shared their time and skills with the Performance Project and made it possible for this work to happen.